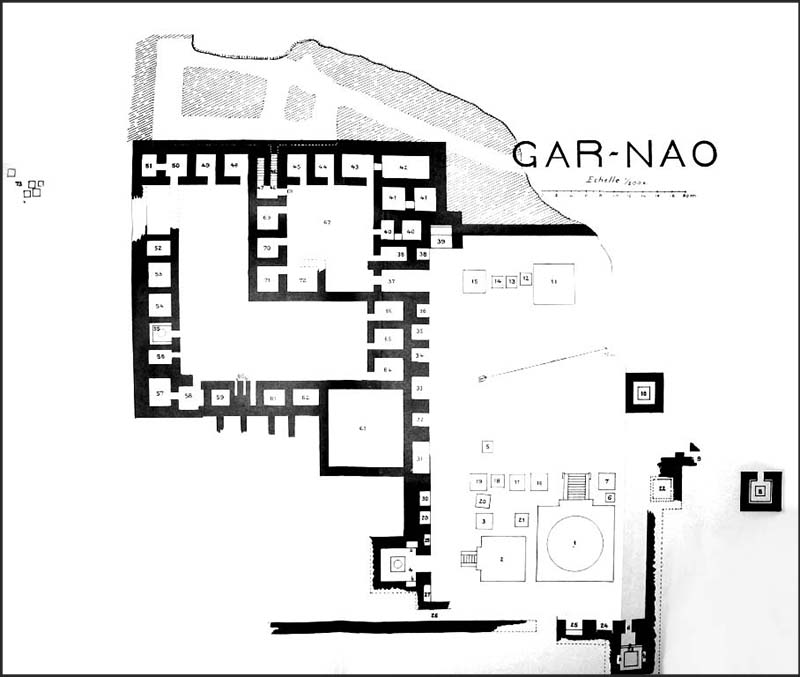 Gār-Naô (abbreviation: A), the "New Cave," is on the edge of the valley descending from Bāgh Gaï. The site was divided into three parts: the Stūpas Courtyard, the monastery, and isolated constructions. The part reserved for the stūpas appeared to be rectangular, however one wing extended to the north and had almost completely disappeared due to erosion. This left only the eastern and western monuments. The entrance was from the east facing two main stūpas with different orientations (A1 to the west, whose decoration evoked the Buddhist heavens, and A2 to the south), embellished by other stūpas, less important in size. At the other end of the enclosure were lined up five stūpas, remnants of a larger lot according to Barthoux. Of the northern wing, only stūpa A 10 remained, isolated by a wall. As at Tapa Kalān, a series of stūpas abutted the enclosure.

The monastery was located in the southwest corner. There appears to have been a considerable expansion of an earlier building. Each of the walls was occupied by a series of cells. The original monastery communicated with the to the Stūpas Courtyard by a corridor. In the southwestern corner, a staircase gave access to the ridge of the enclosure, another led to the caves that were dug under the western wall of the monastery. This "enlarged" monastery did not communicate with the other one, but only with the outside in a place that is now destroyed. A monk's cell A55, bordered on three sides by a bench devoid of statues, revealed a circular stūpa. Perhaps a stūpa built over the remains of a deserving monk.

A large room A63 occupied the northeast corner. Between this room and the Stūpa Courtyard lay a built-up area, now stripped to the ground by erosion. Similarly, to the south of the monastery were stūpas of which only group A73 remains, almost entirely destroyed (Barthoux, 1933: 54ff.).

Perspective of the plan of Gār-Naô drawn by J. Barthoux (Barthoux, 1927) and the current state of the site from Google Earth satellite imagery.