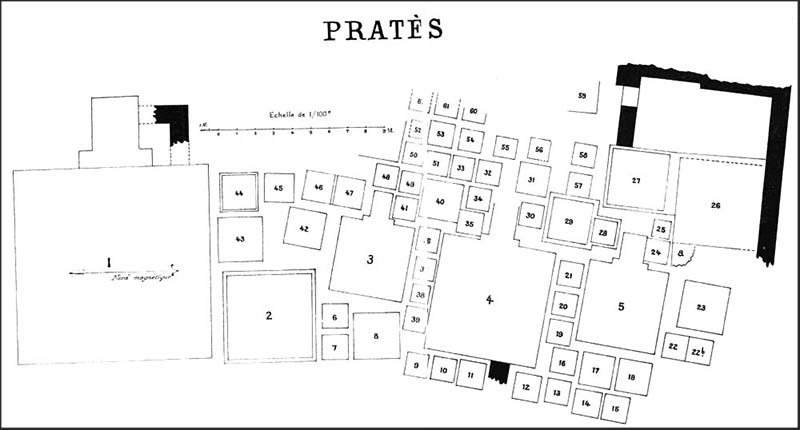 The small hill of Pratès (abbreviation: P) rises about 3 kilometers from the previous sites. It was very uneven and the built-up area only extended for about 60 meters. Known to have been looted for the turquoise of its relics, the remains were also disturbed: the surface of the site was an area of pebbles spread by successive looting and the site was sanded up by the wind.

There is nothing to determine whether or not there was an enclosure. The area appeared as a multitude of stūpas built next to each other, almost next to each other. They were organized around two larger stūpas and formed two groups with slightly different orientations. At the southern end of the site, the Great Stūpa P1 was oriented to the west. In poor condition, it had still revealed ochre-painted figures and 1.5-meter stucco Buddhas modellings with red-marked halos; its decoration evoked the Buddhas of the Past. The other group consisted of the P 4 stūpa, surrounded by two Great Stūpas P 3 and P 5 and a multitude of others, so tightly packed that the ritual of pradakṣiṇā was still impractical here.

The dwellings rose on the north side, in an arrangement parallel to that found at Chakhil-i Ghoundi. Another, less extensive site lies to the north below. It had revealed Large Stūpas, but demolished to ground level, so their excavation was without results (Barthoux, 1933: 48ff.).

Perspective of the plan of Pratès drawn by J. Barthoux (Barthoux, 1927) and the current state of the site from Google Earth satellite imagery.