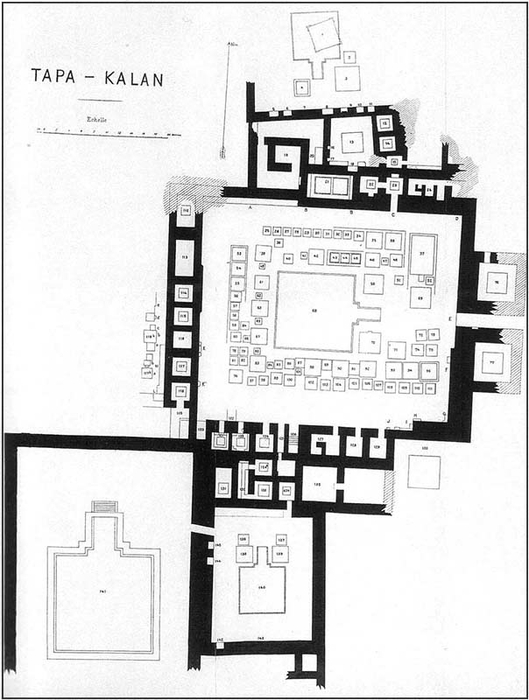 Tapa Kalān (abbreviation: TK), studied by Jules Barthoux, was one of the most important sites in the locality. It was more than 120 metres long, formed by the juxtaposition of four adjoining foundations. The site was approached from the east through a narrow corridor surrounded by two chambers and one had to descend a step to find oneself in front of the main stūpa of the courtyard to the stūpa, TK 68, which bore a modelled representation of the Attack of the Māra Army. This was surrounded by a double row of stūpa, except at the level of the staircase so as not to interfere with access. The floor was covered with stucco plaster. The courtyard was surrounded by chambers and chapels in which numerous statues were discovered. The foundation was enlarged by open or closed cells, protecting new buildings. The enclosure was not strictly square and Buddha statues, sometimes monumental, were leaning against it, inside and outside. Finally, other stūpa were built outside the walls.

The foundation to the north, almost completely eroded, was perhaps the oldest. Here a stūpa TK 1 was found enclosing in its masonry an earlier stūpa, TK 1a. It is known that it was not acceptable to destroy a stūpa, so it was built on top of it, encompassing the ancient structure. It should also be noted that there are numerous indications that the sites were constantly being expanded and remodelled, which is not insignificant for our study. Indeed, each time the sites were remodelled, the whole site was re-stuccoed. It is therefore important to bear in mind that the modelling and reliefs found may not have been put in place initially and may be the result of a reworking, or may not have been made at the same time as the surface on which they are applied and may be the result of a later addition. For these reasons, recent statues or reliefs may adorn an ancient monument.

To the south, two adjoining foundations contained stūpas. The first contained a medium-sized stūpa TK 140, around which were found several schist reliefs depicting the Return of Mayā to Kapilavastu, the Offering of the Four Bowls and the Relic Bearers. It was surrounded by chambers and chapels which revealed heads. The other contained only one large stūpa, TK 141. Stuccoed, the floor around it was packed with clay (Barthoux, 1933).

Perspective of the plan of Tapa Kalān drawn by J. Barthoux (Barthoux, 1927) and the current state of the site from Google Earth satellite imagery.